“Entries came in from new and experienced film makers of all ages and the quality and variety of subject and creative style was impressive.” Says NDMI Creative Director, Amanda McCormack, who hosted the Oscars-style Wild Shorts Awards ceremony in Barnstaple last Friday.

Rhys was delighted with the outcome “Winning the competition was a huge boost of confidence for me. The fact that something I made was able to win something means that I must be doing something right! I had a great time attending the awards show and I can't stress enough how thankful I am to everyone involved. Now I have the spike in motivation to go and make something new!"

The Wild Shorts project which included film making workshops for families, school children and adults was funded by the North Devon Coast AONB, Fullabrook CIC and the Tarka Country Trust. “The films produced for the Wild Shorts competition show how the Areas of Outstanding Natural Beauty provide a feast of the senses for all those who visit and enjoy them.” said AONB Manager Jenny Carey-Wood. “From the tastes of wild fruit and fungi, the feel of sand and shells, the sounds of seabirds and streams, the sight of the sea and sky and the views out to Lundy and inland to the heaths and woodlands. This project has comprehensively achieved the objectives of our Sustainable Development Fund by reaching new people and increasing understanding and awareness of the AONB.”

Thanking the project’s funders and partners at the Wild Shorts Awards ceremony, Amanda McCormack gave a special mention to the local business and organisations whose generous prize donations (see below) were a great enticement to participation in the competition. 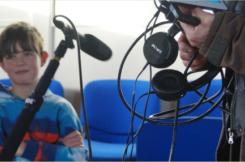