This booklet Heritage Trail booklet highlights some of the most important military and cultural sites of World War II North Devon. it includes locations connected to the work of the British forces in North Devon alongside sites related to the Amercian preparations for D-Day in the Assault Training Centre - and the presence of thousands of American GIs in the area.

Hard copies can be picked up at museums throughout North Devon.

Devon D-Day is an Arts Council National Lottery-funded Project led by the North Devon Museum Service for North Devon and Torridge and delivered in collaboration with a range of partners including the North Devon Coast AONB, North Devon Marketing Bureau, Saunton Beach D-Day, Friends of the Assault Training Center, Christie Estate and the museums adjacent to the northern Devon coast. 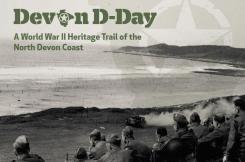