The AONB’s own Dave Edgcombe opened this year’s Appledore Book Festival on 24th September, with his talk about coastal change along the North Devon coast, which was delivered in partnership with Beaford Arts.

Over 100 people attended the talk which looked at the changes to the coast of North Devon by comparing images taken by well-known photographer James Ravillious in the 1970’s and 1980’s as well as images from the Beaford Old Archive taken around the turn of the 19th and 20th centuries, then comparing them with contemporary images taken by Dave during 1916.

Using Dave’s local knowledge acquired over 33 years of working on the coast, he was able to take exact replica images and the presentation looked at comparing these and identifying coastal change in that time.

Some changes were quite pronounced, especially shown in the rise of coastal resorts such as Westward Ho! and Woolacombe. Others showed change as a result of coastal erosion, whilst some images seemed to show little if any change over the past 100 years.

The Coastal Change talks will continue to be delivered over the course of this winter, so look out for others advertised on our AONB website. 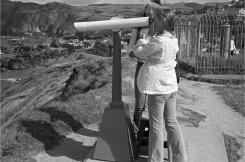