In December 1941 The United States of America entered the 2nd World War when its Pacific Fleet Naval Base at Pearl Harbour in Hawaii was attacked by the Japanese aircraft. This was quickly followed by a declaration of war by Japan’s Allies Germany and Italy. The Americans were initially unprepared for a war in Europe and through 1942 the American nation quickly mobilised their war industries and expanded their armed forces. 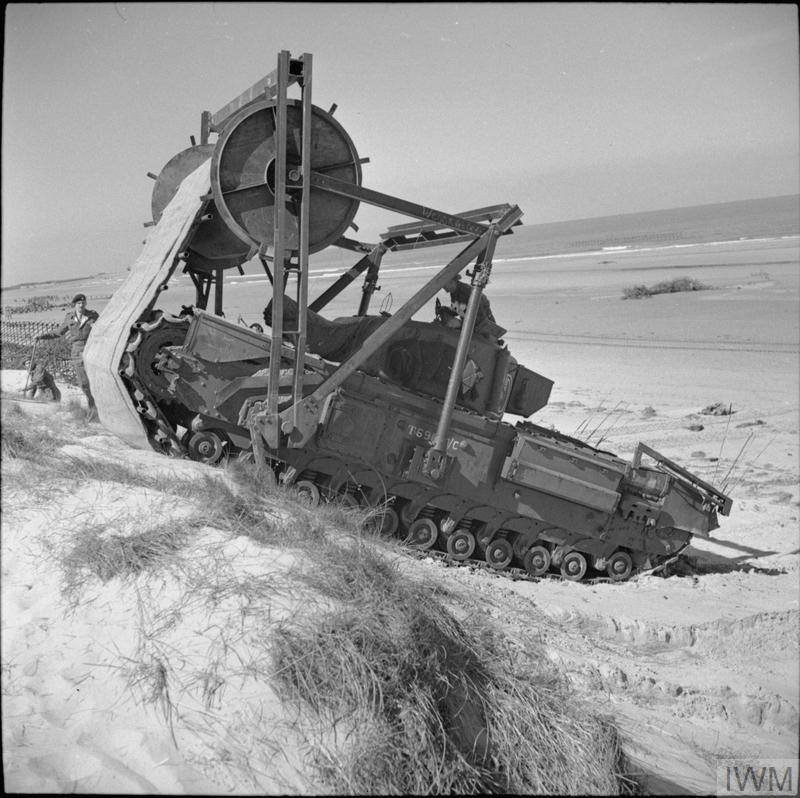 By the summer of 1940 Germany had occupied northern Europe but after the Battle of Britain and the declaration of war on the Soviet Union in June 1941, the Germans had adopted a defensive strategy along the English Channel Coast. As the German War effort began to founder in Russia, the decision was taken at the Cassablanca Conference in January 1943 to make a cross channel invasion of the continent of Europe.

However, in 1942 the disastrous raid by Canadians and the British at Dieppe in France, reinforced German desire to step up work in constructing the so called “Atlantic Wall” and emphasised the need to for the Americans to undertake training for the proposed cross channel invasion.

In 1943, no principle existed in the US Army for assaulting a heavily fortified and defensively prepared coastline and this lack of readiness and need for specialised training led to the formation of an Assault Training Center on the coast of North Devon.

The task was allocated to Lieutenant Colonel Paul W Thompson who activated the Assault Training Center in April 1943 although at that stage no practice ground had been established.

The Assault Training Center established its Headquaters at the Woolacombe Bay Hotel and the Americans used accommodation in Ilfracombe and established camps in Braunton, Saunton and a smaller establishment in Croyde. 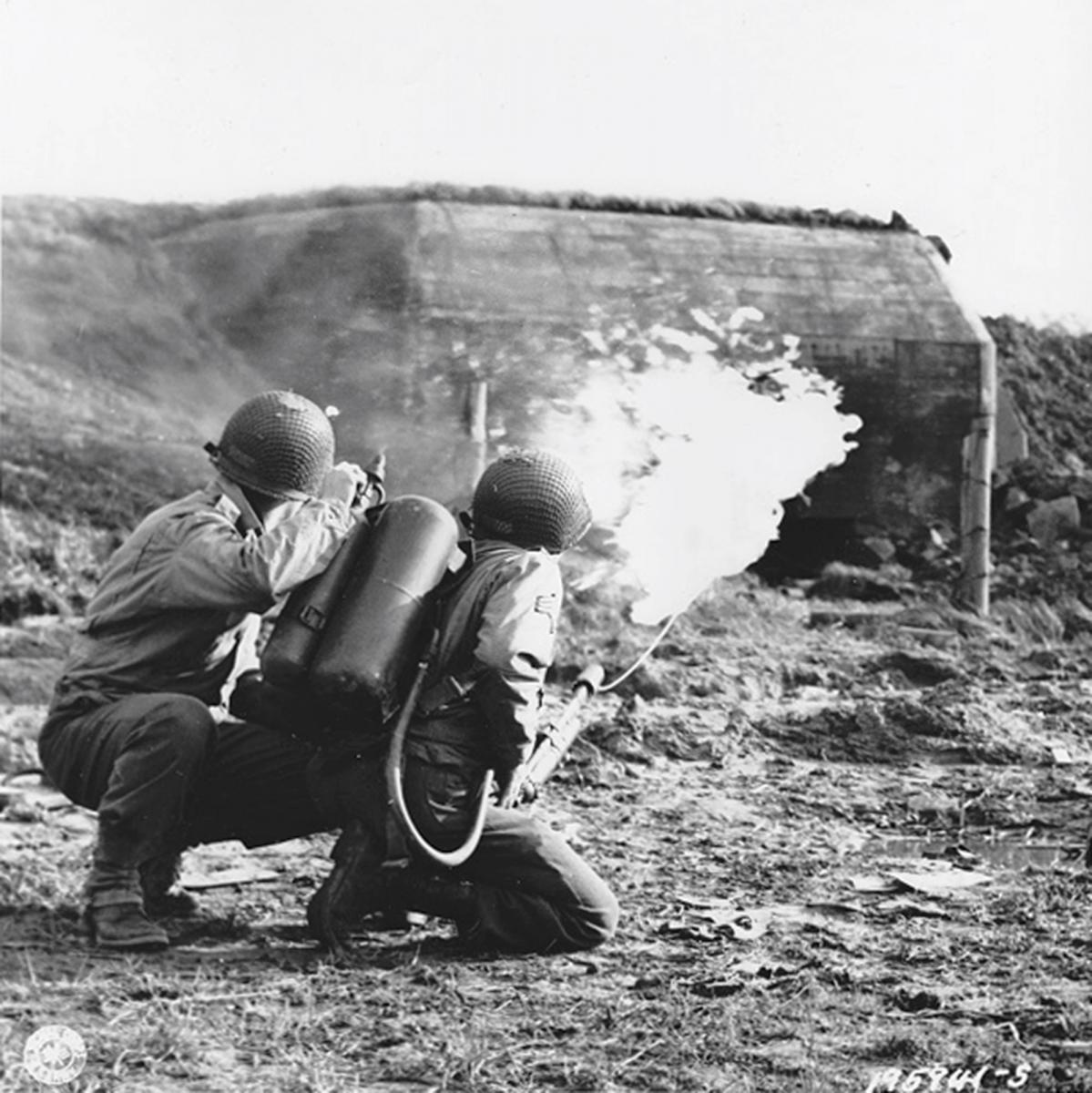 During the summer of 1943, work began on the training facilities in North Devon. Unlike the designated British Beaches in Normandy where the assaults were destined to take place on sandy beaches running into undulating grasslands, the Americans would be faced with steep bluffs and only a few narrow valleys leading off their designated invasion beach at “Omaha” and at “Utah” the low lying dunes ran into a vast area of flooded farmland. As a result, the Americans had no alternative but to secure the beachead on a heavily defended coast with infantry alone and the training facility in North Devon was designed with this in mind.

Training troops to successfully overcome enemy beach defences required training ranges for all weapons based largely around the construction of replica German Pillboxes. The task was given to the 398th Engineer General Service Regiment and this was later passed over to the 146th Engineer Combat Battalion (ECB) who assumed responsibility for finishing construction and maintenance of the training facilities.

Due to the fact that many of the training facilities were used for “live firing” the 146th ECB found it took too long to replace and repair the replica pillboxes that were constantly being attacked damaged and destroyed and as a result the developed a system of creating pillbox size solid concrete blocks with a sculptured or painted embrasure which could be easily repaired.

Whilst the main simulated sea borne practice landings took place at Woolacombe Beach, training facilities were developed in the southern part of Braunton Burrows and this led to the construction of many “replica landing craft” which were used for practicing loading and unloading troops and vehicles.

Finally, other specialist training facilities were created and the Baggy Point headland between Croyde and Woolacombe beaches were used for simulated cliff attack from the sea of hillside fortifications. A guided walk leaflet detailing the role of Baggy Point and the surrounding area can be downloaded here.

On the 1st of September 1943, 9 months before D Day the first American units began arriving to use the training facilities in North Devon. This training would continue until May 1944 and the run up to D Day.

The concrete replica landing craft were constructed in the southern part of Braunton Burrows and located in what was known as “Area A”. 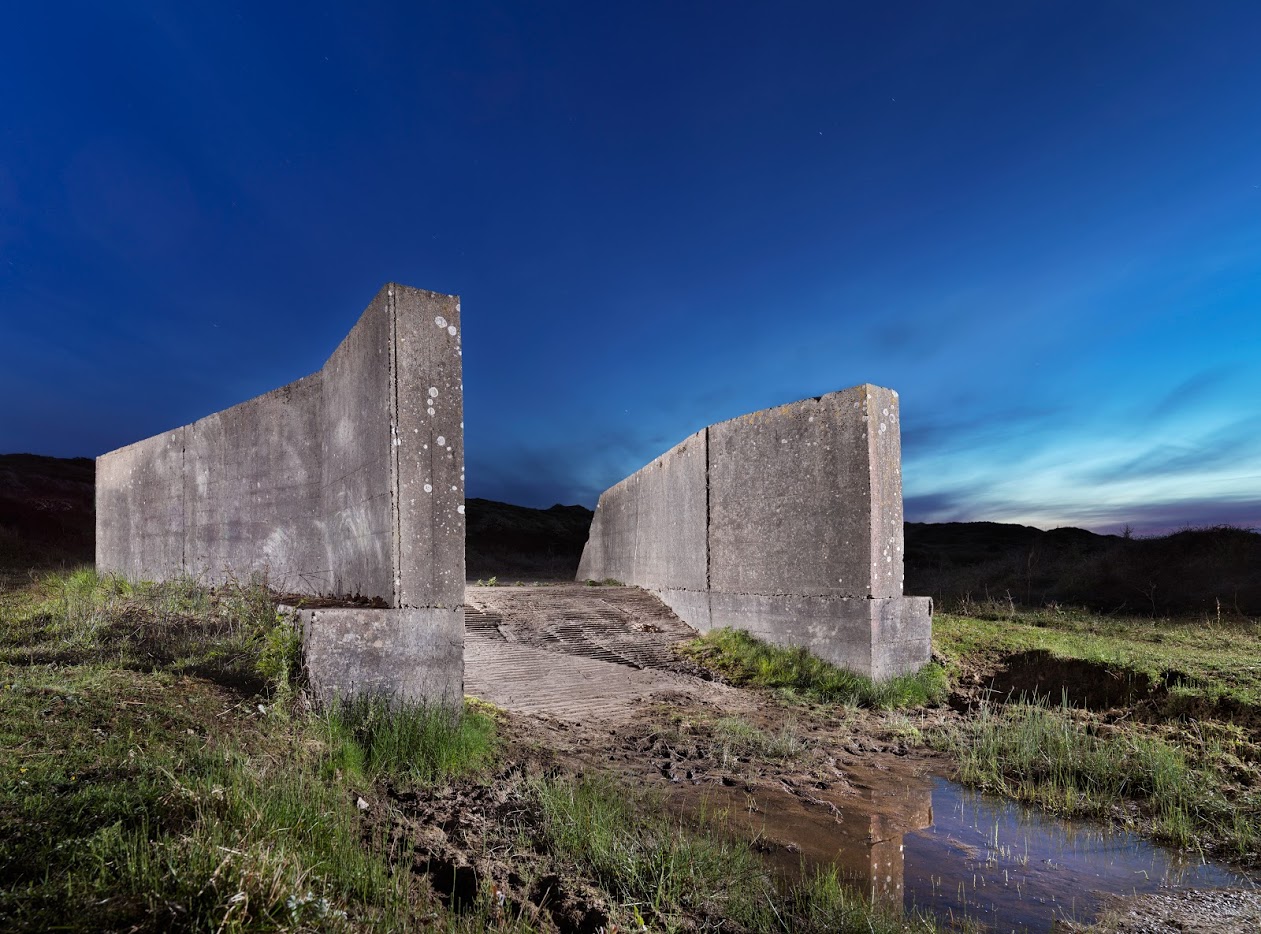 Being located near to the Taw Torridge Estuary the area was extensively used for practicing embarkation, loading and debarkation. This included the use of actual landing craft which were based in the Estuary near Instow and practice on concrete replica landing craft which were located immediately behind these embarkation points on Broad Sands Beach.

450 yards behind this Beach were located a series of scale outlines of Landing Craft Vehicle Personnel (LCVPs) and Landing Craft Mechanised (LCMs) marked with scaffold poles. Troops practiced on these mock ups before moving to assembly areas for actual embarkation on Landing Craft on Broad Sands beach.

To the north of the LCVP and LCM mock up area, six Landing Craft tank (LCT) and two LCMs were constructed. These were much larger and substantial structures with concrete bases to represent LCTs with lowered ramps as if they had just been beached.

Originally constructed to the dimensions of the Mk IV LCT, once it became clear that the larger Mk V would be used additional aprons were added to the rear of the existing bases to represent the extended area. Inscribed in the concrete of one such extension is the mark of its constructors “146th Eng, Co C, 1st Platoon”. Usually the jaws, bases and ramps were produced in concrete, it is known that six-foot high scaffold poles stood around the edges with canvas curtains or corrugated metal sheeting.

The concrete replica landing craft are owned by the Christie Devon Estate and are located within the Braunton Burrows Site of Special Scientific Interest (SSSI) and the Special Area of Conservation (SAC) and form as part of the core area of the UNESCO North Devon Biosphere Reserve, they are also located within the North Devon AONB and North Devon Heritage Coast. In the 1960’s the area became a part of the Braunton Burrows National Nature Reserve a designation that existed until 1996. To see the landing craft in action click here https://youtu.be/C3kFzFQCh8E.

In addition, after the 2nd World War, the Estate continued to lease large parts of Braunton Burrows to the Ministry of Defence and it is still used as a military training reserve to the present day. The site is currently used for simulated infantry attack, using blank firing infantry weapons, but rights do exist for live firing for a certain number of days in the year and this has traditionally has been in the form of controlled demolitions.

To that end, during the 1960’s and 1970’s a large number of the 2nd World War Training Structures were destroyed/demolished, including parts of some of the concrete landing craft.

As the War in Europe progressed, thoughts turned from defence to attack and by 1943 the British in conjunction with their new Allies, agreed to open up a second front in Europe. The area chosen for this attack was the Normandy Peninsula in France and a number of beaches were chosen for invasion. 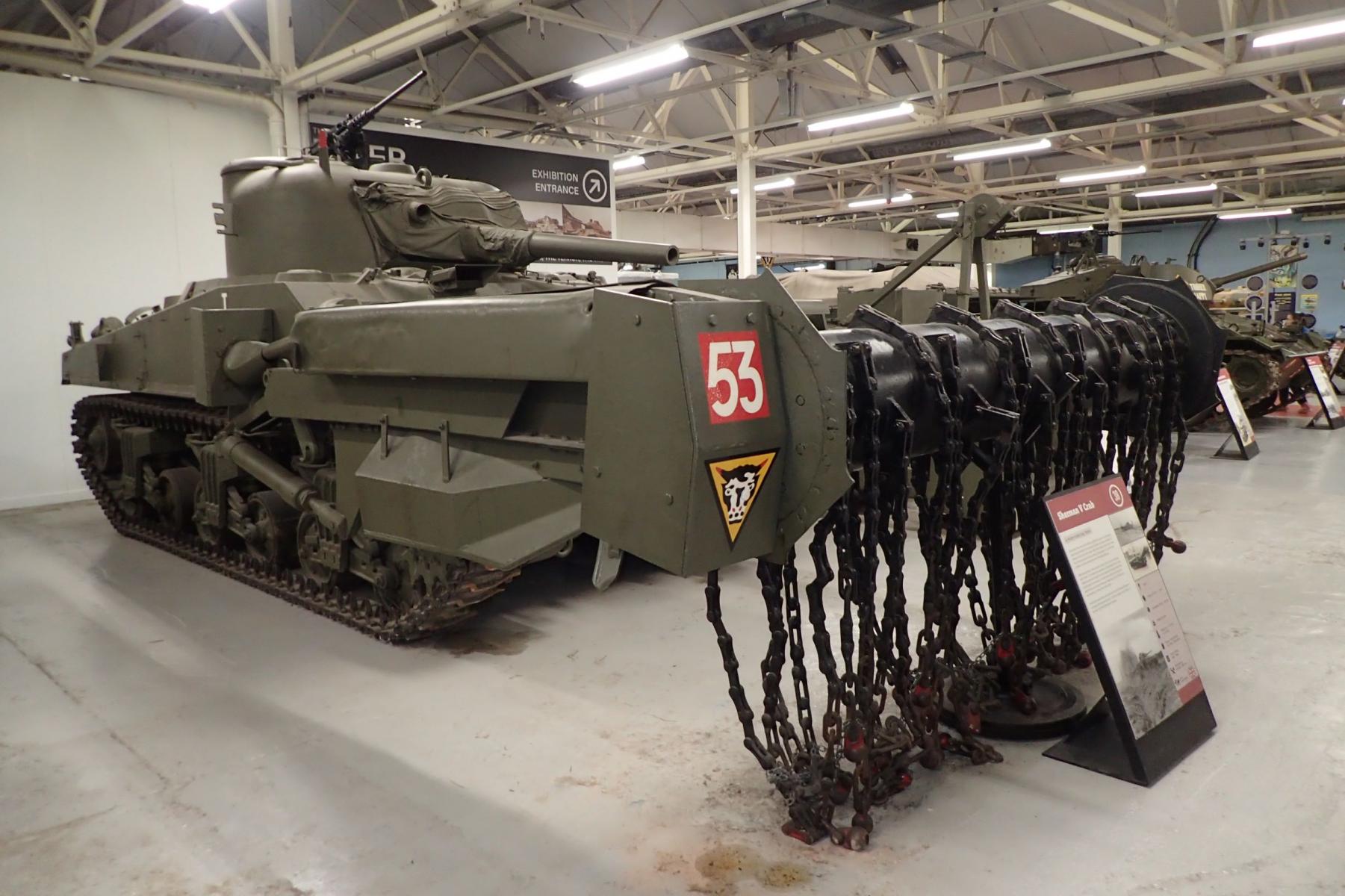 The planned D-Day invasion was the first time in history that a large seaborne invasion was to be attempted on a heavily fortified coastline. Since adopting a defensive strategy in the west in 1941, the Germans had attempted to fortify the French coast, to deter re-invasion of the continent from Britain. The so-called Atlantic Wall was constructed along the entire French Atlantic coast and although never fully completed, it provided a formidable obstacle for an invading army. It was clear that new and innovative weapons would be required to breach these defences.

During the war a series of modified tanks were constructed to train the army in invading the continent of Europe. Many of these tanks were tested on the beaches of Westward Ho! to be ready for D Day.  To assist in this work Prime Minister Winston Churchill turned to an eccentric Major General called Percy Hobart. Hobart was tasked with the job of equipping and training a secret armoured division (which laster became the 79th Armoured Division) which would go on to storm the beaches of Normandy and other major river crossings in Europe.

These medium tanks of both American (Sherman) and British (Cromwell and Valentine) design were modified and would be referred to as the “Hobart Funnies”.

These tank designs included the “Crocodile” a Flame throwing tank, the Pattard Mortar tank and other “AVRE” (Armoured Vehicle Royal Engineer) tanks designed to attack German heavy defensive fortifications these included; the “Bobbin” which rolled out a 10 foot wide canvas mat to overcome soft or difficult ground and the “Fascine” that placed bundles of wooden poles to overcome anti-tank ditches to overcome obstacles; the “Crab” a modified tank with a flail on the front, designed to clear minefields; as well as the DD (Duplex Drive) amphibious tank, which could be launched in water.

About 600 metres towards Westward Ho! a metal Baily Bridge was constructed to allow vehicles to easily traverse the pebble ridge and practice on the beach and this became a major landmark which was only removed in 1962. It is known that the Americans practiced here as well and the original road to the Bailly Bridge is still referred to as the American Road. 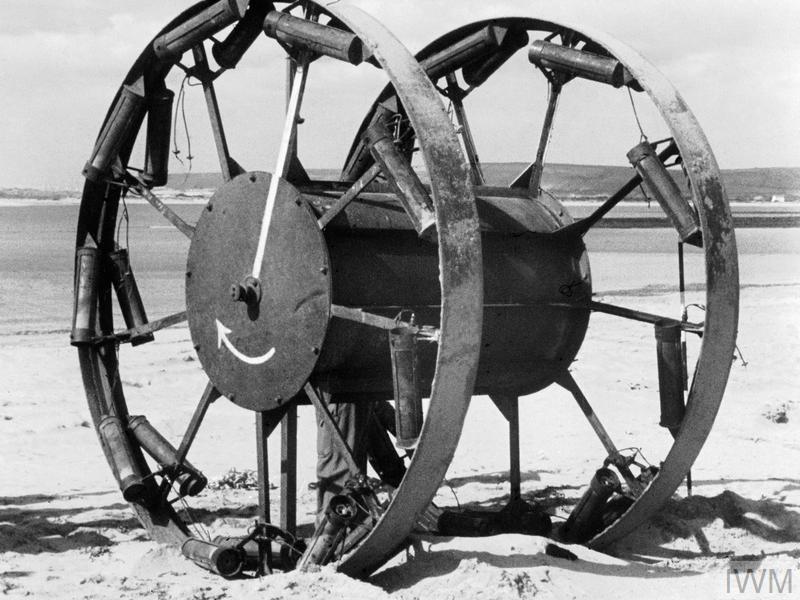 The Great Panjandrum, was one of a number of highly experimental projects developed by the Directorate of Miscellaneous Weapons Development (DMWD) in 1944.

The panjandrum was a massive, rocket-propelled, explosive-laden cart that resembled a huge cotton reel, which was capable of penetrating concrete defences that made up part of the Atlantic Wall. A prototype constructed in East London was transported by night to Westward Ho! but plenty of holidaymakers witnessed the test so the weapon was hardly a secret. The trials were not a success and the project was scrapped, although it has also been claimed that the entire project was a hoax devised to convince the Germans that plans were being developed to attack the heavily fortified defenses surrounding the Pas-de-Calais rather than the less-defended Normandy coastline.

Amphibious military testing continues to this day at nearby Instow and on the other side of the River Taw is the Arromanches Camp operated by the Royal Marines. The geographical conditions in the Taw Torridge Estuary are ideal for training in using amphibious landing craft.

This booklet Heritage Trail booklet highlights some of the most important military and cultural sites of World War II North Devon. it includes locations connected to the work of the British forces in North Devon alongside sites related to the American preparations for D-Day in the Assault Training Centre - and the presence of thousands of American GIs in the area.

Devon D-Day is an Arts Council National Lottery-funded Project led by the North Devon Museum Service for North Devon and Torridge and delivered in collaboration with a range of partners including the North Devon Coast AONB, North Devon Marketing Bureau, Saunton Beach D-Day, Friends of the Assault Training Center, Christie Estate and the museums adjacent to the northern Devon coast.